Scooter Braun is the definition of the new age entrepreneur, one of TIME magazine’s 2013 “100 Most Influential People in the World,” Billboard’s 2013 “40 Under 40” headliner, and one of Fast Company’s “100 Most Creative People in Business.” He is the founder of SB Projects, a company at the intersection of music, film, television, technology, brands, culture and social good. The diversified company combines creativity, the ability to engage global audiences and an understanding of “what’s next” to deliver innovative ideas as a leading architect of popular culture.

Braun began his career as a 19 year-old party promoter and quickly leveraged his success into a VP of marketing role at So So Def Records while still just a 20 year-old sophomore at Emory University in Atlanta. At 24, he left his position to start SB Projects and rapidly gained recognition for his innovative marketing ideas, hard-charging work ethic, and eye for talent.

Today, SB Projects also continues to impact and intersect new verticals under its tech incubator, Silent Labs that holds investments in Uber, Spotify, Songza, Fahlo, and Pinterest amongst others. Braun has a roster of chart toppers under his management, record label and publishing companies that include Justin Bieber, Ariana Grande, Carly Rae Jepsen, Cody Simpson, Tori Kelly, PSY, Dan + Shay, and more. Braun has broken more new music acts than any other music executive in the last decade.

SB Projects also houses a film and television production division. Braun made waves in the industry with his first documentary film, Never Say Never, which remains the highest grossing music documentary in domestic box office history. He continues to expand his roster of television and film titles, serving as Executive Producer on the films, The Giver and Jem and the Holograms (2016) and the CBS drama series, Scorpion.

As Braun continues to expand SB Projects, he remains committed to the company’s founding philosophy of giving back and incorporates a philanthropic tie-in to every initiative. Braun also serves as Chair to the Advisory Board of Pencils of Promise, a non-profit organization that builds schools in the developing countries. The organization has helped to build more than 200 schools in Asia, Africa and Latin America. 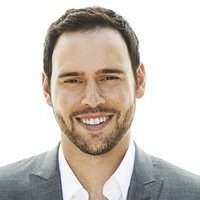