Peter is currently SVP/GM of Sports and Live Entertainment at Unity Technologies, a role he commenced with the global platform leader in January 2021.  Peter was previously at Liverpool FC as Chief Executive Officer, joining in June 2017, a role that brought the lifetime LFC supporter back to his hometown of Liverpool. Bringing his tremendous personal passion for sports, competition, games and the Reds’ to the role; Peter was responsible for all business, commercial and operational areas of the Club – reporting directly to the Club’s ownership, Fenway Sports Group. He was named Premier League CEO of the Year in November 2019.

Prior to Liverpool FC, Peter previously led EA’s Competitive Gaming Division where he brought to life new global competitions for EA franchises including FIFA, Madden NFL and Battlefield. Prior to that Peter served as Chief Operating Officer of EA, providing strategic leadership for all global operations that enabled EA to bring products to market via retail and digital direct-to-consumer channels. He also previously held the position of President of EA SPORTS, overseeing the delivery of some of the top-selling sports videogames from franchises including FIFA, Madden NFL, NCAA Football and NHL. He oversaw the growth of the FIFA Interactive World Cup, growing it into one of the world’s largest gaming tournaments.

Peter has more than 30 years of experience in gaming, entertainment and consumer products. He has held leadership positions as the Corporate Vice President of the Interactive Entertainment Business of Microsoft, heading the Xbox platform business, as President and COO of SEGA of America, where he oversaw the launch of the Sega Dreamcast, and Senior Vice President of marketing at Reebok International Ltd.

Peter holds a bachelor’s degree from Keele University, United Kingdom, and a master’s degree from California State University, Long Beach. He has his own charitable entity, the Peter Moore Foundation, that helps disadvantaged families.  He also currently serves as a VP of Special Effect, a nonprofit that uses technology to enhance the quality of life of people with physical disabilities, and he and his wife Debbie are honorary presidents of Fans Supporting Foodbanks, an organization that delivers meals to thousands of needy families in the Liverpool City Region. 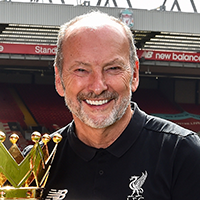