Matt Higgins is an entrepreneur, investor and operator. In 2012, alongside cofounder Stephen Ross, he launched RSE Ventures, a private investment firm that focuses on companies across sports and entertainment, food and lifestyle, media and marketing, and technology. He holds dual roles as CEO of RSE and vice chairman of the Miami Dolphins, overseeing the business of the team, and is a Guest Shark on Shark Tank season 10.

At RSE, Higgins has co-founded several successful enterprises, including the International Champions Cup — a global pre-season soccer tournament that attracts millions of viewers — and communications firm Derris, whose clients include Warby Parker and Crate & Barrel. Under Higgins’ leadership, RSE has also successfully incubated businesses such as restaurant technology platform Resy, and in 2018, RSE acquired SkOUT Secure Intelligence, a cyber security company with over 800 clients around the world.

As an investor, Higgins helps brands navigate pivotal moments. He was the first customer of Gary Vaynerchuk’s digital agency VaynerMedia, and he led the first-round investment in the Drone Racing League, which has since become a leading sports and media company. Higgins is also a partner at Vayner/RSE, an early-stage venture fund that invested in emerging technology companies such as Coinbase, Moment and June.

Higgins is an active philanthropist and board member for Autism Speaks, where he supports the MSSNG project, a partnership with Google that aims to create the world’s largest genomic database on autism. He is a board member for VaynerMedia, Momofuku, Milk Bar, Bluestone Lane, Resy and &pizza. 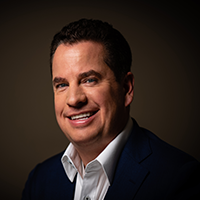