A transformational leader with a remarkable record of achievement, General Stanley A. McChrystal was called “one of America’s greatest warriors” by Secretary of Defense Robert Gates.  A retired four-star general, he is the former commander of U.S. and International Security Assistance Forces (ISAF) Afghanistan and the former commander of the premier military counter-terrorism force, Joint Special Operations Command (JSOC).  He is best known for developing and implementing the current counter-insurgency strategy in Afghanistan, and for creating a comprehensive counter-terrorism organization that revolutionized the interagency operating culture.

The son of Major General McChrystal, GEN McChrystal graduated from West Point in 1976 and joined the infantry.  He began his military career as a platoon commander in the 82nd Airborne Division at Fort Bragg, North Carolina.  Over the course of his career, he held several leadership and staff positions in the Army Special Forces, Army Rangers, 82nd Airborne Division and the XVIII Army Airborne Corp and the Joint Staff.  He is a graduate of the US Naval War College and he completed fellowships at Harvard’s John F. Kennedy School of Government in 1997 and at the Council on Foreign Relations in 2000.

After 9/11 until his retirement in 2010, General McChrystal spent more than 7 years deployed to combat in a variety of leadership positions.  In 2002, he was the chief of staff for military operations in Afghanistan. A year later he was selected to deliver nationally televised Pentagon briefings about military operations in Iraq. From 2003 to 2008, McChrystal commanded JSOC where he led the US Military’s counter-terrorism efforts all over the world.  From the summer of 2008 until June of 2009, General McChrystal was the Director of the Joint Staff.  In June of 2009, the President of the United States and the Secretary General of NATO appointed General McChrystal to be the Commander of US Forces Afghanistan and NATO ISAF.   His command included more than 150,000 troops from 45 allied countries.  On August 1 of 2010 General McChrystal retired from the US Army.

General McChrystal is a senior fellow at Yale University’s Jackson Institute for Global Affairs where he teaches a course on Leadership in Operation.  He sits on the board of the Yellow Ribbon Fund, Navistar International Corporation and JetBlue Airways.  He is also the Chairman of the Aspen Institute’s Franklin Project and the Service Year Alliance, both dedicated to promoting national service initiatives among American youth.

General McChrystal co-founded the McChrystal Group in January of 2011 where he is currently a partner.  McChrystal Group’s mission is to deliver innovative leadership solutions to American businesses to help them transform and succeed in challenging and dynamic environments.

General McChrystal resides in Alexandria, Virginia with his wife of 39 years, Annie. 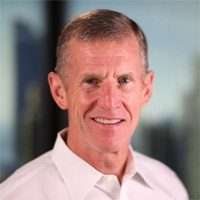