He is a graduate of the US Army War College, Carlisle, Penn., and the Naval Command and Staff College, Newport, R.I.

GEN Thomas is a native of Philadelphia, Pa. He attended the United States Military Academy at West Point, N.Y., and was commissioned an Infantry second lieutenant upon graduation in 1980.

GEN Thomas and his wife Barbara have two sons, both of whom are United States Military Academy graduates, Tony (Class of 2007) and Michael (Class of 2008).

GEN Thomas retired May 2019 and resides with his wife in the Tampa Bay area.  He is currently serving as the Chairman of Special Operations Warrior Foundation and on boards and in advisory positions in the aviation and Artificial Intelligence fields. 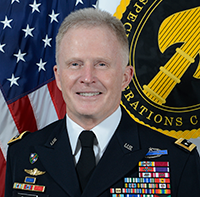