The Kavli Foundation
President and CEO

Robert W. Conn has been since 2009 President and CEO of The Kavli Foundation. The Foundation is dedicated to advancing science for the benefit of humanity, promoting public understanding of scientific research, and supporting scientists and their work. It awards the Kavli Prize biennially, has established twenty endowed Kavli Institutes in the fields of astrophysics, nanoscience, neuroscience and theoretical physics, and has played a seminal role in several major science initiatives, most particularly the U.S. BRAIN Initiative. The Kavli Foundation, along with five other foundations, formed the Science Philanthropy Alliance to increase philanthropic support for basic science. Dr. Conn serves as Chair of its board.

Dr. Conn is recognized for his academic achievements, his leadership in education, research, and science philanthropy, and his experience in the private sector. He began his academic career at the University of Wisconsin-Madison where he became Romnes Faculty Professor of Engineering Physics, co-founded the University’s Fusion Technology Institute and served as the Institute’s first director. He moved to UCLA where he founded and led its Institute of Plasma and Fusion Research.

Dr. Conn has been a leading researcher in plasma physics, fusion energy, energy policy and materials science. He pioneered, beginning in the 1970’s, the study of potential fusion power reactors, identifying the major physics and engineering challenges facing the development of practical fusion energy. His theoretical and experimental research focused on plasma physics, the plasma boundary layer, surface science and chemical physics. He was elected to the National Academy of Engineering in 1987 for his pioneering research contributions to the fields of plasma physics and fusion energy.

Dr. Conn moved to UC San Diego in 1993 to become Dean of the Irwin and Joan Jacobs School of Engineering and Walter J. Zable Professor of Engineering Science. While Dean, he led the School through an unprecedented period of growth in faculty, students and reputation, resulting in the School’s naming and its current ranking among the top engineering schools in the country. Research centers established during his tenure include the Center for Wireless Communications, the Whitaker Institute for Biomedical Engineering and the California Institute for Telecommunications and Information Technology (Calit2). He built partnerships between the university and industry and established the von Liebig Center for Entrepreneurism and Technology Transfer.

Dr. Conn’s experience in the private sector includes co-founding Plasma & Materials Technologies, Inc. (PMT), a company that developed etching and thin film deposition equipment used to manufacture semiconductors. PMT had an initial public offering on NASDAQ and was later acquired. He has served on the Boards of public companies in the semiconductor space, and from 2002 to 2008 was a Managing Director at Enterprise Partners Venture Capital (EPVC), where he led investments in early stage high tech and IT companies.

Dr. Conn is a member of the National Academy of Engineering and a Fellow of both the American Physical Society and the American Nuclear Society. He is the recipient of the Ernest O. Lawrence Memorial Award, the McGraw Research Award of the American Association of Engineering Education, the Distinguished Associate Award of the U.S. Department of Energy, and the Distinguished Alumni Award of the California Institute of Technology. He has served on committees for the U.S. Government, the University of California, the National Academies of Science, Engineering , Medicine, and several national laboratories. Dr. Conn received his B.S. in Chemical Engineering from Pratt Institute, and his M.S. and Ph.D. in Engineering Science from the California Institute of Technology.

The Kavli Foundation
President and CEO 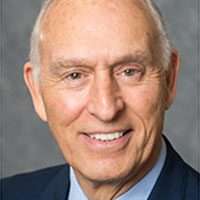