Cristina Alesci is a television and digital correspondent for CNN and CNNMoney. She covers the companies and business leaders that influence everyday life and unravels the complexities of Wall Street and corporate America. Cristina has also brought her brand of investigative reporting to the U.S. industrial food complex with a recently released documentary-style series, “Raw Ingredients—The unprocessed story of where your food really comes from.” Raw Ingredients goes into the field and inside some of the country’s biggest producers to uncover the vast system supplying the nation’s food and to reveal the hidden story of what you’re eating.

Over the course of her reporting, Alesci has interviewed the biggest names in business, including Starbucks’ CEO Howard Schultz, JP Morgan chief executive Jamie Dimon and J.Crew’s Mickey Drexler.

Cristina joined CNN from Bloomberg Television, where her coverage of high-profile deals made headlines and moved markets. Cristina was responsible for breaking news on some of the biggest deals of the decade, including Facebook’s initial public offering, the buyout of Neiman Marcus and the fight to take Dell private. While at Bloomberg, she also covered the sports, music and entertainment industries, and contributed to Businessweek and Bloomberg Markets Magazine. 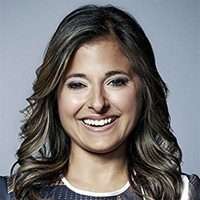