WHY ALLI WEBB IS CAPTIVATING AUDIENCES

8 years, nearly 100 locations, and hundreds of millions of dollars later, Alli Webb’s Drybar has exploded into a nationally-recognized and highly sought-after brand. Naturally curly haired Webb, has been a professional stylist for close to twenty years and in 2008, after spending five years as a stay-at-home mother in California, Webb decided to embark on a new side project, Straight-at-home. Traveling from home to home in LA, providing affordable “blowouts” to all her mommy friends. In less than a year, demand for Webb’s services skyrocketed, leading her and her brother Michael and husband Cameron to open their first brick-and-mortar Drybar location in Brentwood, CA in February 2010.

Since its inception, Drybar has expanded to dozens of locations across the country, beloved for its delight- fully simple, bar-themed approach to affordable style. Webb has also diversified the Drybar brand, creating a line of products & tools sold at popular retailers such as Nordstrom, Sephora, and Ulta. All the while, she’s managed to say humble and appreciative of the learning process behind building a multi-million dollar business from scratch while also creating an experience that customers truly love. In a wide-ranging and delightfully engaging conversation, Webb discusses the peaks and valleys of life, the value in pursuing your passions, her journey as an entrepreneur, mother and the importance of women in business.

Alli Webb founded Drybar in 2010 after spending 15 years as a professional stylist. She attended the Art Institute of Fort Lauderdale and began her career in fashion in New York City in the early ‘90s working for designer Nicole Miller. In 1996, she left fashion retailing to pursue her true passion – hairstyling.

After training at the Toni & Guy Academy, Webb sharpened her skills as an assistant to celebrity stylist John Sahag, famous for his signature dry-cut technique. Having struggled with her own extremely curly hair, she was always in search of a great blowout but was often disappointed with the two available options – an overpriced blowout at a traditional salon or a less-than-desirable experience at a discount chain.

After leaving the professional hair workforce in 2005 to start a family, she decided to find a way to continue pursuing the creative side of hairstyling at a new-mom pace. Webb began offering weekly in-home blowout services to all her Mommy friends, but her little side business quickly grew into more than a part-time gig. The business exploded strictly by referrals from loyal clients, which led her to the decision to expand her mobile operation to a physical location. The first Drybar opened in the Brent- wood neighborhood of Los Angeles in 2010 and was an overnight sensation.

Drybar has since expanded to a 100 locations throughout Los Angeles, New York, Las Vegas, Boston, Dallas, Houston, Chicago, San Francisco, San Diego, Atlanta, Philadelphia, Washington, DC and Vancouver, BC. Alli remains active in the business as the Chief Creative Officer at Drybar, overseeing the hiring and training of more than 3,000 stylists across the country and leading the development of Drybar’s line of styling products and tools. Drybar’s growing product line is sold through its own shops, as well as in Sephora, Nordstrom, Ulta and select Bloomingdale’s stores throughout the U.S. and Canada.

In October of 2016, Webb released her first book with Abrams Publishing, The Drybar Guide to Good Hair for All sharing inspiring memories, her own personal struggles with her hair, a how-to guide for women to achieve the perfect Drybar styles at home, all while reinforcing the power of confidence that comes from feeling your best. The book quickly became a New York Times Bestseller. More importantly, it’s her hope that The Drybar Guide to Good Hair for All inspires and empowers others to turn their passion and dreams into a reality.

Webb’s unique approach to business has awarded her with numerous accolades. In 2013, Fast Company named her one of the “100 Most Creative People in Business,” and she was featured on the “Cosmo 2013 Power List” by Cosmopolitan magazine. She was also included on the prestigious Fortune “40 Under 40” list, recognizing her as one of the top young businesswomen in the world. 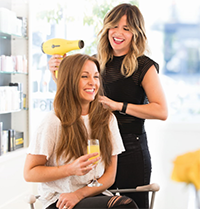